How’s this even possible?

We all know that the solar panels are useless during the night time and their efficiency is significantly reduced by the clouds, during the daytime. 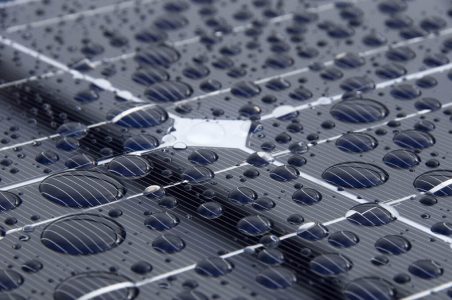 It might be though a solution to these issues.

A recent research conducted by a Chinese laboratory at Soochow University, demonstrates that we could harvest energy from solar panels even it’s dark outside. To be more precise, as long as it’s raining, the solar panels developed by Soochow University will produce energy from the raindrops falling from the sky. Sounds like an interesting idea, isn’t it? Deserts around the Globe will not benefit much from this, obviously. But if we think of those countries where there is a significant quantity of rain over the year, this project could be a workaround. Or not quite ?!…

These photo-voltaic cells getting energy from rain are based on the triboelectric effect.

The research team from Soochow University developed what they call TENG (triboelectric nanogenerator), a layered structure sitting on the top of the PV cell. When the raindrop rolls down on the solar panel having incorporated the TENG layer, will produce static electricity. This electricity is then captured and sent further into the PV system. The main issue here, so far, is that the energy being produced is not significant.

There is hope though that in the next 3-5 years, TENG technology will be improved so it could make a difference in the solar panels efficiency.